Investing in our People is an Investment for you

We are committed to staff development and believe fervently in giving people a chance to develop their full potential. This is a strategy that we believe encourages loyalty and commitment to the company in an industry where staff are so often transient or even subcontracted.

Our site workforce is currently 14 strong and includes time served bricklayers, stonemasons, joiners and skilled ground workers. Several of our staff have been with us for more than ten years.

Day to day operations are planned on a weekly basis through the rigid discipline of a weekly planning meeting. The meeting usually takes several hours and involves directors and senior site staff. As such it is a serious financial commitment to making sure that our expensive site operations are conducted in as controlled and efficient a way as possible. 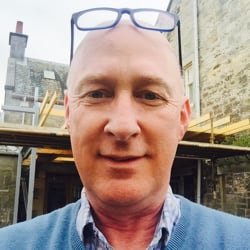 My father, desirous of becoming an Architect in his youth, became a Chartered Civil Engineer, so Design and Engineering is a bit of a family tradition. He had a passion for quality and for innovation in construction both of which rubbed off on me.
After graduating with 1st Class Honours in Civil Engineering from the University of Edinburgh in 1984 I completed a 4 year Design and Management training programme with British Railways (York)
In 1988, determined to expand my experience, I joined a small practice of multi disciplinary Consulting Engineers in Harrogate and took responsibility for the technical design and on site implementation of commercial projects in Yorkshire and the City of London. Façade retention schemes and temporary works designs for demolition projects necessitated constant innovative thinking and rapid resolution of structural problems.

In 1989 I qualified as a Chartered Civil Engineer and joined Westbury Tubular Structures, an expanding steel fabricator specializing in high quality and complex architectural tubular steelwork projects. Rapidly promoted to the position of Contracts Director I stayed with the company for 12 years assisting in its growth and development from sales of £2.5m to £18m.
During that time I was Project Director for many large prestigious steelwork projects in the UK and overseas (particularly Malaysia) and played a key role in expanding the company into the Far East. In 1992 I was part of a successful MBO team that took over WTS and sold it to a large competitor in 1997.

Gill Morrison joined Gradual Peak Ltd in 2008 during a time of changing focus and major cost cutting. Gill’s background in management accounting and change management has been invaluable in providing a sound financial background for the company and a stable platform for its activities.

With a family background in construction Gill has a keen interest in project management with an understanding of the value of clear communication between management, staff, clients and suppliers. Gill’s calm approach to each project helps to ensure smooth implementation of Gradual Peak’s key objectives of Communication, Budget, Timescales and Quality.

Daniel Johnston joined the team at Gradual Peak in 2007 having graduated in Architectural Technology at Edinburgh Napier University.

Daniels extensive CAD experience and detailed knowledge of the Building Regulations has been essential to our Development and Contracting projects alike. As an involved member of the construction team he shares a sound practical knowledge of “what works and what doesn’t”. He uses this skill to full effect in the production planning and construction drawings.

Daniel’s in house position allows Gradual Peak to respond promptly and effectively to technical issues. The speedy resolution of site queries and provision of specific complex dimensional information to site staff is a speciality.